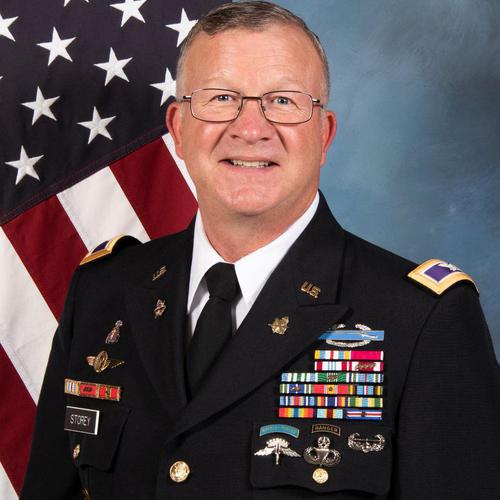 Talks covered by this speaker

Colonel Scot Storey currently serves as the Director of the U.S. Army Peacekeeping and Stability Operations Institute, U.S. Army War College, as it promotes the collaborative development and integration of peace and stability capabilities across the U.S. government, international organizations, and the community of interest. Prior to his Carlisle assignment, Colonel Storey was assigned to U.S. III Corps, Fort Hood, Texas where he served as the Assistant Chief of Staff, G9. In this capacity, he was responsible for coordinating all matters concerning civil-military operations. During this assignment, he also served as the Deputy J9 for Combined Joint Task Force – Operation Inherent Resolve in Baghdad, Iraq where he facilitated the coordination with the International, Inter-Agency, and Non-Governmental Organizations working within Iraq and Syria. A native of Texas, he graduated from Texas Tech University in 1988 and was commissioned as an Infantry Officer. He has commanded at the platoon, detachment, company, battalion, and brigade level. In addition to his command billets, Colonel Storey has served as a Ground Operations Officer Special Operations Command – South; Chief of the Command Center at the U. S. Army Special Operations Command; Civil Affairs Officer manager and later Special Operations Forces Enlisted Branch Chief at the U.S Army Human Resources Command; Civil Affairs Proponent Chief, U.S. Army John F. Kennedy Special Warfare Center and School; and the Assistant Chief of staff, followed by Operations Officer, Special Operations Command – Africa. In addition to his military training and specialty courses, Colonel Storey obtained a Master of Sciences degree in Emergency Management and Disaster Preparedness from Trident University, and a Master of Strategic Studies from the U.S. Army War College.

Your logo could go here!

If you'd like to get your brand in front of attendees following the categories this speaker is talking about (on this page, via email and during each talk) contact us.
We use cookies This website (and some of its third-party tools) use cookies. These are important as they allow us to deliver an exceptional experience whilst browsing the site. Learn more about our cookie policy. By closing this banner, scrolling, clicking a link or continuing to browse, you agree to the use of cookies. Accept
I need help
No I need help
No I need help